All Ready for Halloween! 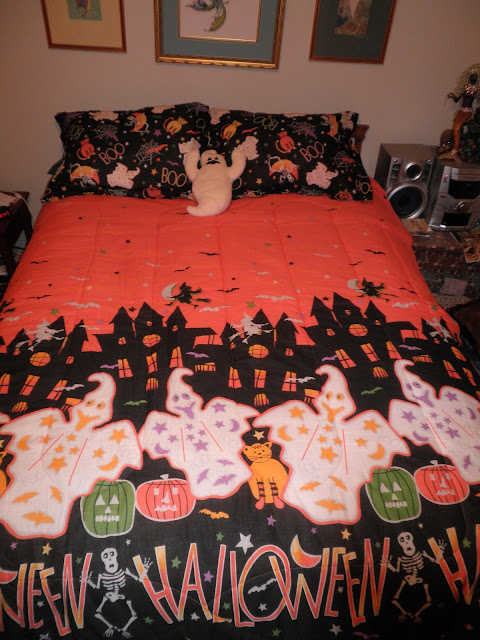 I found this adorable Halloween bedspread for sale online and had to buy it. When I went to bed the first night, I quickly discovered the ghosts glow in the dark. How cool is that? And don't you love the matching ghost accent pillow? I'm all set for Halloween. Are you?
Posted by Sheila A. Nielson at 8:52 AM 3 comments:

This last month has been filled with a flurry of work while I and my family prepare to film the Forbidden Sea book trailer. Things are never as straight forward as you might think when filming. Especially when you have no budget to speak of. A lot of things don't come out exactly as you'd like them to--but then again pleasant surprises pop up along the way as well. People who have read Forbidden Sea will see right away that some literary license had to be taken with the storyline in order to condense it down into a trailer length plot that makes sense to people who have not read the book. We have Denn in a scene he was not actually a part of in the book, but it works better that way for the trailer. Adrianne does not have short hair like she does in the novel, but the girl who plays her is PERFECT for the part, so I figured it was a trade-off worth making. The actor who plays Denn is the real boyfriend of the young actress who plays Adrianne, so the chemistry between them is just right--and he definitely looks the part. We still have more filming scheduled for next weekend. I hope everything continues to come out as well as it has begun. I can't wait to see the finished product!
Posted by Sheila A. Nielson at 11:55 AM No comments:

I So Wish I Had That!

Before you know it, Christmas will be upon us once again. So here it is.  A list of totally bizarre stuff you can buy online but probably never will. Someplace deep inside, though--you know you wish you could.

WARNING: Clicking on links below will take you to outside websites over whose content I have no control.

Remote Control Wand (must have)
http://www.thinkgeek.com/electronics/home-entertainment/cf9b/?cpg=cj&ref=&CJURL=&CJID=1764687

Bacon Band-Aids (I kid you not)
http://www.whatonearthcatalog.com/whatonearth/Customer-Favorites_2AA/Item_Funny-Food-Bandages_CF2912_ps_cti-2AA.html

Food Face Plate (yes, you may play with your food)
http://www.whatonearthcatalog.com/whatonearth/Item_Food-Face-Plate_CE5342_ps_dpr.html

Food Jewelry (Can you smell the bacon?)
http://www.whatonearthcatalog.com/whatonearth/Shop-By-Theme_4AA/Odd-Bizarre_4BY/Item_Skillet-amp-Eggs-Earrings_CH0342_ps_cti-4BY.html

Peace Sign Toaster (All I can say is--WHY would you ever want one of these?)
http://www.whatonearthcatalog.com/whatonearth/Shop-By-Theme_4AA/Odd-Bizarre_4BY/Item_Peace-Sign-Toaster_CH1192_ps_cti-4BY.html

Nose Gel Dispenser (not even going to comment)
http://www.shopgadgetsandgizmos.com/product/18294/?gclid=CMLT1aPj5KsCFQgaQgodoguCHA


I know what I'm putting on my Christmas list this year . . . how about you? 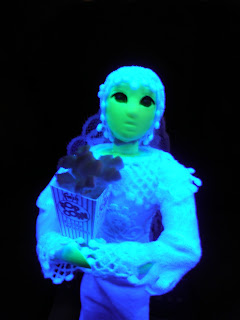 It's Halloween time once again and I thought I'd post an appropriate link to celebrate. Usually when you think of haunted houses, you think about scary stuff. But the cute ghosts of the world have a right to haunt houses too! For anyone who likes their ghosts adorably cute and not so scary, check out the link below to find out all about Whispia--possibly the cutest ghost in the whole world.

P.S. I predict that glow-in-the-dark dolls are going to be all the rage this year.
Posted by Sheila A. Nielson at 10:27 PM No comments: