I was looking back over the blogging I've done over the past year and realized that most the people who keep up with this blog are those who have actually read some version of one of my unpublished manuscripts already. (Or if you are Joella or Jenny, have been told in great detail a story from begining to end while working at the desk with me. You did ask for it, however.) So I'm starting a club called The Secret Manuscript Club. SMC for short. Only those who have read or heard one of my completely unknown early works can be members. (Yes Daphne and Chani, you are now official members. Karlene, Ashley, Adrienne and Pinky are senior members, since they have all been willing to subject themselves to my stories in progress for many years now.) Those of you who haven't had a chance yet--count your blessings. In this one time offer, I'm extending a free membership to anyone who wants it just for subjecting yourself to reading this article! : )

Okay, okay, nobody is really going to force you to join some ridiculous club, I promise. What I'm trying to say in my silly way is that I'm grateful for all the love and support each of you have given me this year and in years past. May you all have the best New Year ever!

P.S. If you see me handing out invisible SMC membership buttons to people in the weeks to come--run! See you next year!

I've Been Dreaming of a White Christmas--NOT 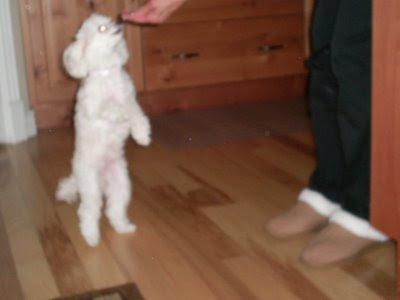 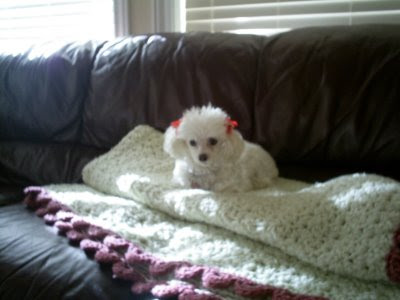 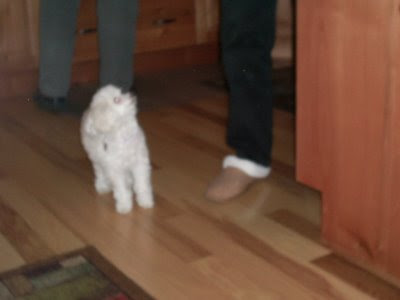 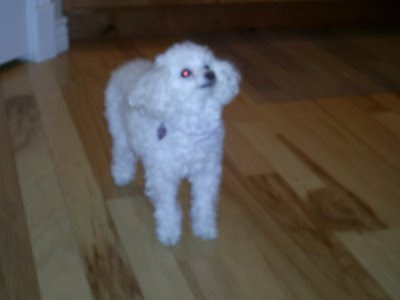 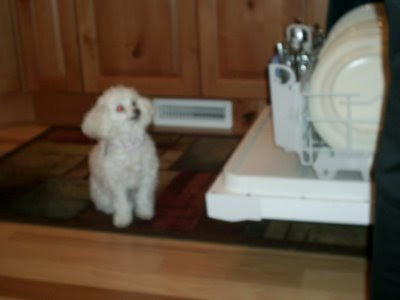 We had a very white Christmas this year. There was a lot of more snow than I would have liked. The snow was so bad where we live that most of my family couldn’t come see us on Christmas day. Still, I can’t complain since Santa brought me a brand new laptop this year! I don’t know how I got along without it before now. It makes writing my stories and working on this blog a whole lot easier than it used to be. There was one creature that was glad none of the family came to visit. All the more leftover Christmas ham for her. I’ve included a few photos of my poodle doing what she does best—beg for leftovers in the kitchen. Who could resist that face? Not my mother, that's for sure. I swear the dog has doubled in size since yesterday. Of course, she's so small to begin with that’s not saying much. Notice the red bows on her ears in the one picture. She had them off within an hour.
Posted by Sheila A. Nielson at 1:23 PM 3 comments:

Having grown up in California, learning to drive on snow has never been easy for me. With all the snow storms that have come through our area this last week, driving to and from work has been an interesting experience to say the least. But after watching this hilarious video of lots of other people struggling to drive in icy conditions I feel a whole lot better.

Have You Bought a Book for Someone You Love Today?

I've been reading some articles lately about how the scary economy has hurt the publishing industry. People can't afford to buy books anymore so publishing houses are having to put a freeze on aquiring new manuscripts. Just imagine all those fantastic unpublished stories out there that will never be discovered because no publisher can afford to aquire them. What if no one had ever given Harry Potter a chance because the economy was bad? So what can we book lovers do to stop this tradgedy? Buy books for Christmas. Give everyone on your list the gift that keeps giving. What better present could there be? There are whole webpages out there devoted to the Buy-a-Book movement. Join the club, save the world--buy a book! I'm getting down off the soap box now--I promise.

P.S. Somebody on my Christmas list is getting a book they are going to LOVE for Christmas! Don't you wish you knew who it was?
Posted by Sheila A. Nielson at 8:47 AM 4 comments:

All I have to say is, why didn't I think of this years ago and make lots of money selling a book about it? If you'll click the link below you can view a video of kids terrified while getting their photo taken on Santa's lap. Ah the memories. Not to mention the many faces of Santa. These are men truly dedicated to their work. I died laughing while looking at the slideshow of photographs at the right hand side of the webpage. Hope you do too.

And here is another one. You have to scroll down to the bottom of the page and look at them one by one.

Makes you view Santa in a whole new light, doesn't it?
Posted by Sheila A. Nielson at 2:37 PM 3 comments:

What is it that stirs the hearts of young maidens? You’d be surprised. While at work the other day, I happened to mention that back in elementary school I had a desperate crush on Michael Knight, of Knight Rider fame. I assumed this early obsession with a fictional character was something unique to myself but quickly learned I was not alone in my youthful folly. Without hesitation very woman in the room named off a TV or movie character she had loved from afar as a child. I began asking around and discovered that every person I asked had a ready answer. From the enthusiasm and girlish giggling that followed the confessions I was pretty sure a few of them still had some lingering passion for these lost loves who never existed. Here, in no particular order, are a few of the MEN who stole our hearts in the first innocence of youth.

And the winner who inspired the most crushes:
Zach Morris (Saved by the Bell) a surprising amount of women concidered him to be quite the hottie in his day.

Have a youthful folly of your own? Feel free to add him to comments.
Posted by Sheila A. Nielson at 3:32 PM 6 comments: